This article is out-of-date. It was written at a time before decisions were made to use DDS and RTPS as the underlying communication standards for ROS 2. It represents an idealistic understanding of what RPC and “actions” should be like in ROS. It can be considered memoranda and not necessarily the intention of how to develop the system.

This article is an exploration of possible design patterns for the next generation of ROS Remote Procedure Call interfaces. We focus here on specifying the user API and leave the implementation unspecified. It is expected that there are one or more RPC implementations which can be used, such as Apache Thrift, ROS RPC, or MsgPack.

In ROS there are two types of Remote Procedure Call (RPC) primitives. ROS Services are basic request-response style RPCs, while ROS Actions additionally are preemptible and offer feedback while requests are being processed.

It is useful to consider the ideal system to understand how it relates to the current ROS 1 system and how a new system could work. An ideal RPC system would have the qualities laid out in the following paragraphs.

If a service provider hangs or otherwise does not return correctly, then a calling thread may be hung indefinitely. Having a timeout allows for recovery behavior in the case of failure conditions besides a dropped connection, allowing the user to choose to continue waiting for another timeout cycle or abort the request.

In order to effectively use preemption without a timeout, periodic or procedural feedback is usually required. Feedback can be provided via an external mechanism such as an implicitly related publish-subscribe channel. Feedback is also central to the concept of Actions in ROS.

It is important that the system cannot get into an undetermined state if there is packet loss. If a request or response is never received by either side the system must be able to notice this loss, then recover and/or inform the user in some way. In ROS 1, this lack of reliability has been a problem for ROS Actions, e.g., when they are used over lossy wireless links.

When logging a ROS 1 system (e.g., using rosbag), recording data transmitted on topics is insufficient to capture any information about service calls. Because service calls are conceptually point to point, rather than broadcast, logging them is difficult. Still, it should be possible to efficiently record some level of detail regarding RPC interactions, such that they could be later played back in some manner (though it is not clear exactly how playback would work).

The features outlined above are desirable but if provided as a monolithic implementation will be much more complicated than necessary for most use cases. E.g., feedback is not always required, but in a monolithic system it would always be an exposed part of the API. We propose four levels of abstraction into which the above features can be sorted, with each higher level providing more functionality to the user. 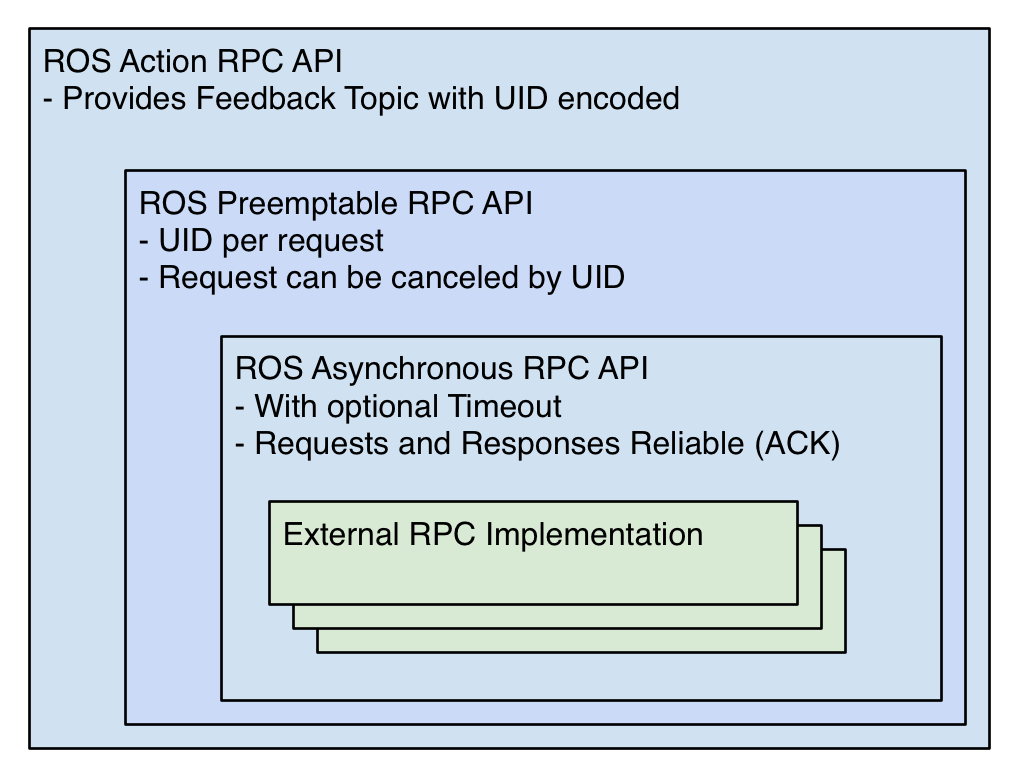 The Plain RPC API is expected to be able to be leveraged from one or more externally developed RPC libraries. We expect several libraries to meet the minimum requirements and aim to make them interchangeable.

For logging/introspection purposes the RPC Server instance might publish all incoming requests and outgoing responses on topics inside the namespace of the service.

The ROS preemptible RPC API will extend the Asynchronous API to enable preemption of an RPC in progress using a unique identifier (UID). This UID will be provided by the initial request method.

For each of the above Asynchronous APIs a thin wrapper can be built on top to provide a single function-based interface for ease of use. It will block until a response is returned or the timeout is reached. If wrapping a preemptible RPC, it will both timeout on the user side as well as preempt the remote side. This will just be a thin layer on top of the Asynchronous API requiring no additional features of the core RPC protocol.

There are some issues with the above proposed approach, which are outlined below.

UIDs are generally necessary for asynchronous communications to pair the requests and the responses. There are possible ways to build this without a UID embedded in the data type, however it will require some level of heuristics to do data association.

There are two options: (i) require the user to embed the UID into the message, or (ii) add those fields automatically at message-generation time. It is unclear how this choice affects the user’s ability to introspect the messages. This also introduces issues when trying to record and potentially play back Service or Actions.

Should there be a separate .action file type? Or should it be more like a .srv + .msg pair? This is highly influenced by the way UIDs are handled.

Recorded service calls can not be played back generically like topics because the service client will not handle it because it will not be associated with a request. There could be some test service servers which can respond with similar queries, however it is not clearly defined.

Logging of RPCs is still valuable for debugging and introspection. It would be valuable to have a view of events that happened in sequence as well as their content. It should be possible to associate recorded request and response pairs, which raises the question of how to embed this association without significantly affecting the user’s API.

This is a generic issue with logging and affects potentially all logging and should be captured in a separate article. It might be possible to pad communications with debugging data.

The above UIDs may be only locally unique (client-specific for instance). For logging, UIDs need to be unique within the entire ROS instance to support debugging.

These two types are very similar and limiting the variants on the API might be easier for the user. If the UID must be generated/embedded into the protocol, then it should be embedded into all calls, which will help with logging. For the non-preemptible case the implementation can simply not instantiate the state machine and preemption mechanisms.

There are use cases when the concept of caller_id is valuable. Users of ROS Actions would sometimes use it to provide connection-based information. By default the anonymous publish-subscribe mechanism is to not provide the caller_id. In the current implementation the caller_id is actually the node name, which is ambiguous in cases like nodelets. Providing a mechanism for declaring the caller_id might be helpful, but would require a lot of tools to parameterize and remap in order to gain the full benefit.

One possible solution is to write a spec where a field that matches [CallerID caller_id] would be automatically substituted by a publisher if embedded into a message to provide this specifically where valuable.

Do not bundle feedback at core level

If namespace remapping works, feedback could simply be a topic which is in the same namespace as a peer. This would enable multiple feedback topics of differing types and frequencies. Action API classes could be provided on top of the core infrastructure to bundle an RPC with a feedback.