Actions are one of the three core types of interaction between ROS nodes. This article specifies the requirements for actions, how they’ve changed from ROS 1, and how they’re communicated.

There are three forms of communication in ROS: topics, services, and actions. Topic publishers broadcast to multiple subscribers, but communication is one-way. Service clients send a request to a service server and get a response, but there is no information about the progress. Similar to services, action clients send a request to an action server in order to achieve some goal and will get a result. Unlike services, while the action is being peformed an action server sends progress feedback to the client.

Actions are useful when a response may take a significant length of time. They allow a client to track the progress of a request, get the final outcome, and optionally cancel the request before it completes.

This document defines requirements for actions, how they are specified in the ROS Message IDL, and how they are communicated by the middleware.

There are two entities involved in actions: an action server and an action client.

It is responsible for:

An action client sends one or more goals (an action to be performed) and monitors their progress. There may be multiple clients per server; however, it is up to the server to decide how goals from multiple clients will be handled simultaneously.

It is responsible for:

Differences between ROS 1 and ROS 2 actions

In ROS 1, actions are implemented as a separate library, actionlib that is built on top of the client libraries. This was done to avoid increasing the work required to create a client library in a new language, but actions turned out to be very important to packages like the Navigation Stack and MoveIt!1.

In ROS 1, actions were implemented using a set of topics under a namespace taken from the action name. ROS 1 services were not used because they are inherently synchronous and actions need to be asynchronous. Actions also needed to send status/feedback and be cancelable.

In ROS 2, services are asynchronous in the common C implementation, so actions will use a combination of services and topics.

In ROS 1, an action client can create a goal ID when submitting a goal. This potentially leads to scenarios where mutliple clients independently generate the same goal ID. If an empty goal ID is sent, the action server will create one instead, which is not very useful since the client has no way to know the goal ID.

In ROS 2, action clients will be the sole entities responsible for generating the goal ID. This way clients always know the goal ID for an action. Futhermore, a UUID will be used for each goal to mitigate the issue of goal ID collision across multiple clients.

Namespacing of Generated Messages and Services

Visibility of Action Services and Topics

In ROS 1, rostopic list would show all action topics in its output. In ROS 2, ros2 topic list and ros2 service list will not show topics and services used by actions by default. They can still be shown by passing an option to the commands to show hidden services and topics. The tool ros2 action list will produce list of action names provided by action servers (see Introspection tools).

Actions are specified using a form of the ROS Message IDL. The specification contains three sections, each of which is a message specification:

Actions, like topics and services, are introspectable from the command line.

The command line tool, ros2 action, will be able to:

Each action will be listed and treated as a single unit by this tool.

The action server maintains a state machine for each goal it accepts from a client. Rejected goals are not part of the state machine.

There are three active states:

State transitions triggered by the action server according to its designed behavior:

Usage examples can be found in the examples repository.

Under the hood, an action is made up of three services and two topics. In this section, they are descibed in detail.

The purpose of this service is to send a goal to the action server. It is the first service called to begin an action, and is expected to return quickly. The description of the goal in the request is user-defined as part of the Action Interface Definition.

The QoS settings of this service should be set so the client is guaranteed to receive a response or an action could be executed without a client being aware of it.

The purpose of this service is to request the cancellation of one or more goals on the action server. The response code indicates any failures in processing the request (e.g. OK, REJECTED or INVALID_GOAL_ID). The list of goals in the response indicates which goals will be attempted to be canceled. Whether or not a goal transitions to the CANCELED state is indicated by the status topic and the result service.

The cancel request policy is the same as in ROS 1.

The purpose of this service is to get the final result of a goal. After a goal has been accepted the client should call this service to receive the result. The result will indicate the final status of the goal and any user defined data as part of the Action Interface Definition.

The server should cache the result once it is ready so multiple clients have to opportunity to get it. This is also useful for debugging/introspection tools.

This topic is published by the server to broadcast the status of goals it has accepted. The purpose of the topic is for introspection; it is not used by the action client. Messages are published when transitions from one status to another occur.

The QoS settings for an action server can be configured by the user. The default QoS settings for a DDS middleware should be TRANSIENT LOCAL with a history size of 1. This allows new subscribers to always get the latest state.

The possible statuses are:

This topic is published by the server to send progress feedback about the goal that is user-defined as part of the Action Interface Definition. It is up to the author of the action server to decide how often to publish the feedback.

The QoS settings for feedback coming from an action server can be configured by the user. It is up to the clients to use compatible QoS settings.

Here are a couple of sequence diagrams depicting typical interactions between an action client and action server. 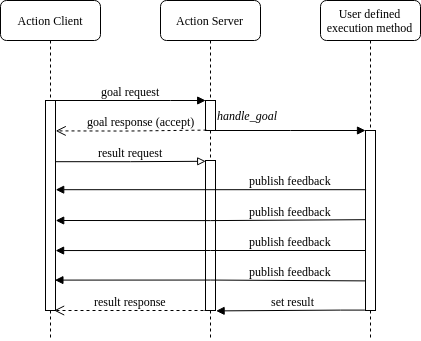 This example is almost identical to the first, but this time the action client requests for the goal to be canceled mid-execution. Note that the user defined method is allowed to perform any shutdown operations after the cancel request before returning with the cancellation result. 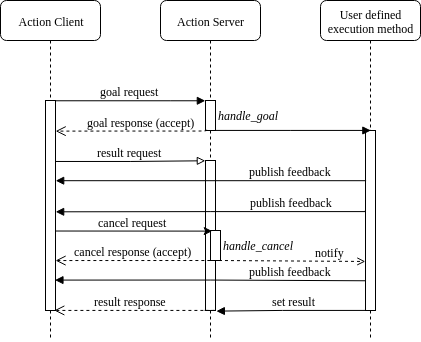 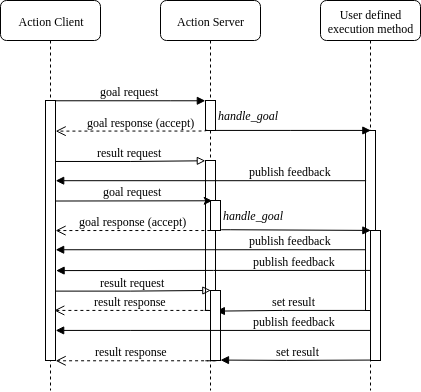 Topic and service names for actions will include a token _action. The leading underscore makes the name hidden, and the combined text allows tools to identify topics and services used by actions. Topic and Service names will be generated by prefixing the action name to one of /_action/status, /_action/feedback, /_action/get_result, /_action/cancel_goal, or /_action/send_goal. The resulting topic or service name is expanded to a fully qualified name as usual.

Bridging between ROS 1 and ROS 2

These alternative approaches to actions in ROS 2 were considered.

An alternative to using services and topics is to implement actions in the rmw layer. This would enable using middleware specific features better suited to actions. The default middleware in ROS 2 uses DDS, and there don’t appear to be any DDS features better for actions than what are used for services and topics. Additionally implementing actions in the rmw implementations increases the complexity of writing an rmw implementation. For these reasons actions will be implemented at a higher level.

Multiple topics for feedback and status

When there are many goals from many clients, the choice to have a single feedback (and status) topic per action server is suboptimal in terms of processing and bandwidth resource. It is up to clients to filter out feedback/status messages that are not pertinent to them. In this scenario, M goals are sent to N clients there is an unecessary use of bandwidth and processing; especially in extreme cases where M and N are large.

One approach is to use multiple topics (distinguished by goal IDs) or the “keyed data” feature in DDS that allows for “content filtered subscription”. This would allow clients to only subscribe to the feedback and status messages that they care about.

A second approach is to give clients the option to specify a custom feedback topic as part of the goal request. This would be useful to alleviate extreme cases without the overhead of creating/destroying topics for every goal when the number of goals/clients is small.

Reasons against using separate topics for feedback and status:

It seems reasonable in the future that the “keyed data” feature in DDS can be employed to reduce overhead in the “many goal/client” scenario. This will require that the feature be exposed in the middleware, which it is not at the time of writing this proposal.

On the other hand, it would be nice to expose the method for generating goal IDs and let the user correlate the goals with other libraries/systems. Imagine an action client being used to request a robot to perform tasks from a database where each task already has a UUID associated with it. In this case, it is still the action servers responsibility to ensure goal ID uniqueness and handle any potential races with concurrent goal requests, but we have the added benefit of the user being able to correlate goals to other existing entities.